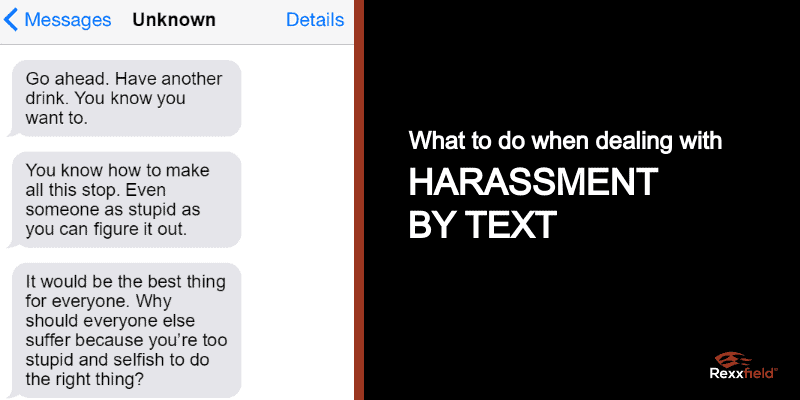 When dealing with harassment by text…

The content of the text will determine if a text is considered harassing. Even if the person is someone you know or close to you, such as family or friends, the text can still be considered harassing, depending on the content. In some cases, it doesn’t even have to include threats, it can be enough if it’s spam-like or abuse. Here are the most important contexts that make a text harassing.

The consequences of harassment depend on the severity of the harassment. The punishment for a person responsible for the harassment text message can range from less than a year in jail (misdemeanor) to high-level felony charges. When the antagonist violates a restraining order or was charged with harassment or a domestic violence offense in the past, a severer punishment will be used.

Depending on the state, high-felony charges may also be relevant if you are harassed based on:

If you’re not sure if a harassment text message you received constitutes harassment, a few examples of harassing text messages can help clear things up.

This Reddit thread has an example of harassment by text that includes threats of violence. According to the victim, the man who sent the message texted that he has “the means to inflict severe hardship, pain, and suffering.” This is clearly considered a harassing text message.

If this type of message sounds like the one you received, go to the police. With threats like this, it is not worth the risk to wait for the harassment to stop.

Another example of harassing text messages is of a woman from Toronto who received thousands of hate-fuelled text messages for months. One of the harassment texts reads, “Kill yourself and maybe I will f*** myself just for fun.” Because the perpetrator(s) used spoofed phone numbers, police said there is nothing they can do. Most who used spoofed services think they have anonymity, but they don’t. Our cyber investigators identify perpetrators behind spoofed phone numbers on a weekly basis.

What can the police do about harassing texts

What can de police do about harassing texts is a question we often get. Law enforcement in some states are still learning how to address cyberbullying, internet harassment, text and calls harassment, and so on. Some local police are less skilled in the cyber department because before the internet became a tool to harass and threaten, police were given “jurisdictions,” and each law enforcement agency operated within their jurisdiction. Now, when an “online crime” occurs, many law enforcement officials don’t know how to deal with the issue because the crime happened on the internet. “Cyberspace” is not in a specific jurisdiction.

Based on our experience with law enforcement, and our clients’ experiences, local police often do not act on digital harassment. The harassment by text police tend to follow up on are those that endanger health, safety, and welfare.

Health: Are the harassing texts causing stress and anxiety?

Repeated text messages that affect your health should be reported. Every person has different stress and anxiety thresholds, and when harassing texts have passed yours, you have to contact the police.

Safety: Does it affect your feeling of safety?

If harassing texts make you feel unsafe, you should report these. If you are even considering changing your daily patterns to avoid certain situations because of the contents of the harassing texts, let the police know you have a fear of personal injury.

Welfare: Are the texts affecting your career?

Many people receive harassing texts that contain threats to their career, job, or livelihood. If they are sexually offensive texts from co-workers, you could file a sexual textual harassment claim. However, if you have a warranted fear of retaliation, you should speak with the police. Some harassing texts, especially ones that contain photos, qualify for a criminal arrest.

Suppose you receive disturbing text messages from an unknown number. In that case, the police have to obtain telephone records from the mobile phone companies to track down the antagonist and reveal his or her identity. To obtain these records you need legal permission. This process often takes some time, so be prepared to wait.

If the police do not help, our cyber investigators can help in identifying the individual(s) behind the harassing texts.

Learn more about our investigators

Keep in mind, though, that if you are dealing with spam messages, the police won’t be able to help you. Police can only take action when your health or safety is jeopardized, as described above.

When your ex husband or ex wife sends harassing text messages, you may want to get back at them by doing the same. However, it is crucial to resist this urge for retaliation. Retaliation will only make matters worse.

If your ex wife or ex husband sends you harassing texts, don’t respond. If there are threats to you or your children, go to the police and contact your attorney.

What to do if someone is harassing you by text

As soon you receive harassment by text, or someone threatens you in any way, you should go to the police.

If the unwanted texts are from one single phone number or a scammer, you can choose to block the phone number. However, if you want to pursue investigating the identity behind the harassment, don’t block any phone numbers.

Like we said before, you may feel the urge to respond to harassing text messages or calls but don’t. Ignore it. The antagonist only wants your attention, and seeing you distressed is what gets them excited.

To get law enforcement to take you seriously:

Keep screenshots of everything: every message, every phone call log, etc. If you can’t make a screenshot, use a camera to save the harassing data. Also create backups of the text messages in case you lose the device, or they are accidentally deleted in a system update.

In most cases, you can go to your mobile account, and download your call records yourself. If you can’t, contact your mobile provider. Print and highlight every harassing call on the phone records. Take these phone records to the police, to show the harassment.

Make copies to keep yourself

Before taking all the collected evidence to the police, make identical copies for yourself. Law enforcement officers might not return your originals for weeks or months.

If you have a suspect, collect proof of motive that supports your claim.

Report the harassment by text to the local police

If you know where your harasser lives, go to the local police in his or her area.

When you are at the police station, ask to meet with a detective. You may be asked by the officer at the front desk about your matter.

When reporting harassing texts, use short and sweet language. Explain your case without emotion. Calling the harasser names or accusing him or her won’t help in making the police take you seriously.

Use keywords. You could say, “John Doe has been harassing me with text messages since Feb 15, 2021. I asked him to stop at least three times. He continued the harassment, and it is getting worse. I now fear for my safety and my family’s safety. I have collected the evidence of John Doe’s harassment for your review.

If there is no detective available, ask for the business card of the officer you are talking to and request the detective’s card. Or write down their contact details.

The police detective will decide the next steps. If he or she believes you are harassed, the city or state government will press charges if the prosecutor wants to pursue the case.

When you received threats of murder or bombing your car, criminal charges will be filed.

If the detective thinks there is nothing they can do about the harassment, the evidence will be returned to you. In that case, you will have to pursue justice.

In this case, you could engage a criminal lawyer or private cyber investigator. Our cyber investigators are able to identify the harasser so you can get a court order to force the harasser to stop. We also have contacts with lawyers who can help you pursue legal action when we have found the identity of your harasser.

If you need help in identifying the individual responsible for the harassment by text, please contact us.